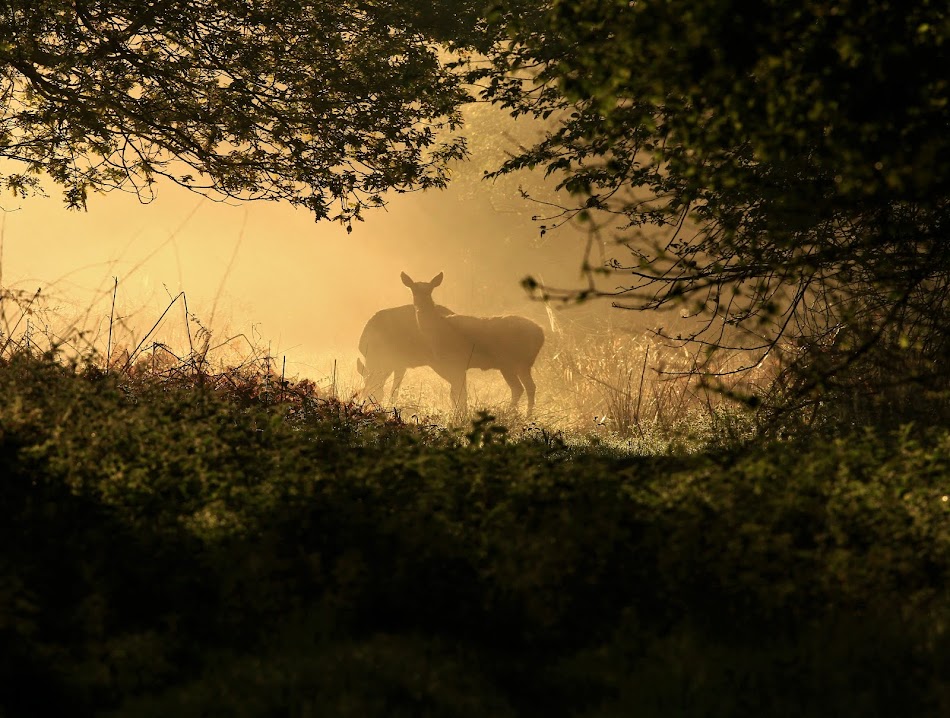 Some Breckland Habitats and their birds

It is sad to say that in the current climate of development, comes habitat destruction, and although promises are made to restore habitats by planting a few ornamental trees, losses of habitats, their eco-systems, along with connectivity between important such sites through wildlife corridors, severely impacts upon bird populations.  Along with this destruction comes the problem of 'tidying up' the  countryside by uneducated people who think that cutting a hedge to ground level looks pretty.

Despite my ramblings, there is much good going on in the countryside too with restoring hedges, areas being subject to special protection status, good interaction with landowners, and the growing force of nature conservation organisations.

I love to identify habitat rich areas and seeing what is attracted to them, and some areas I have seen this spring have indeed benefitted birds, especially visiting Warblers. 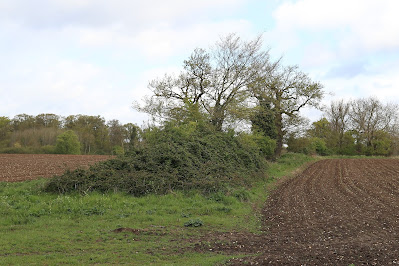 Field margins such as this site near Great Cressingham has a beautiful, large patch of Bramble, a fantastic habitat for several species of birds.

Watching this habitat on 10th May 2021, the following species were seen: Singing Whitethroat, Goldfinch (pair), a beautiful male Yellowhammer on territory, and a Blackbird.

I must say that these patches of ground cover are some of my favourite habitats. 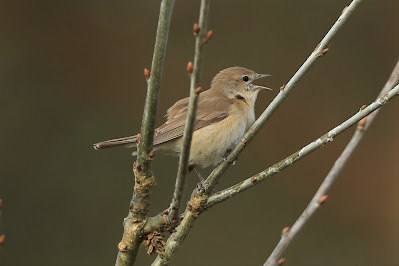 This Garden Warbler was one of a pair present in prime breeding habitat near Hockham Norfolk on 12th May.
Woodland edge with lots of low bushes and ground cover was used by this male as he flew around his territory.  Both he, and the female bird were seen flying together into the probable nest-site in low ground cover with this tree used as a song-post. 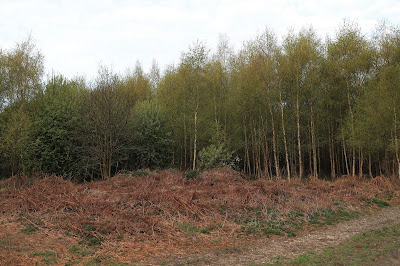 This habitat near Great Hockham held 3 singing Garden Warblers on 30th April, along with a pair of Blackcaps.

This Birch woodland comprised trees of about twenty feet tall with ground cover and some beautiful Bird Cherry at the woodland edge.

I find the song of Garden Warbler easily distinguishable from that of Blackcap.  The song delivery is of an even flow, sometimes with the tonal quality of Blackbird, it is generally prolonged and does not have the fluty peaks of Blackcap. 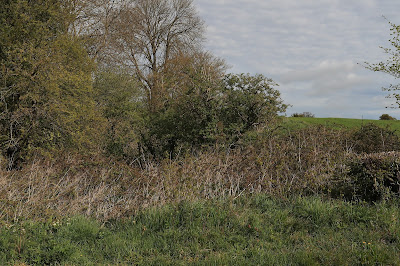 This next habitat near Watton, Norfolk, is prime Whitethroat habitat, and indeed, on the day of this visit on 9th May, a male Whitethroat was singing, performing its conspicuous song-flight, and sometimes uttering its alarm and agitated notes. The female was present and gave its "churr" agitation call.  The male bird sand from several song-posts including small trees, Hawthorn and Elder. The nest is located in the foreground amongst low, tangled ground cover and nettles. 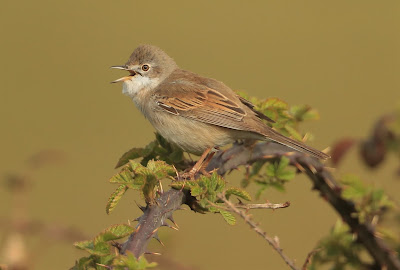 Of all the Warblers, I must say that Whitethroat hold a very special place in my heart.  This beautiful Sylvia suffered a very major population crash on their wintering grounds in the Sahel when a severe drought struck that region in 1968/69.  The following spring a very high percentage of this species failed to return to their habitats in Britain.
The population of Whitethroat has recovered but not to the pre 68/69 levels.
Needless to say when this bird returns with us, it really does raise a smile.

Posted by The Breckland Birder at 10:19 No comments:

A bad move.  Why ban dogs from our beaches?  It is irresponsible dog owners, as well as some human visitors who disrespect and litter our beaches who should be banned.  Let dogs have their enjoyment and freedom. 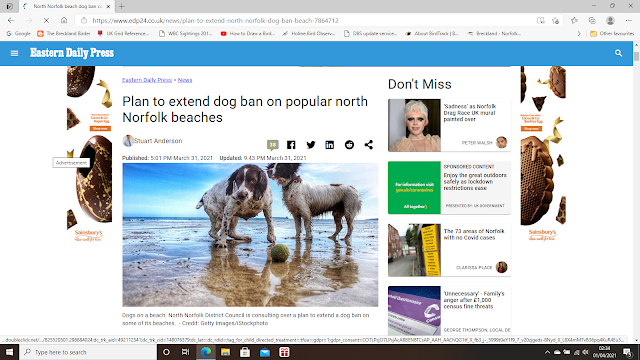 Posted by The Breckland Birder at 18:43 No comments: 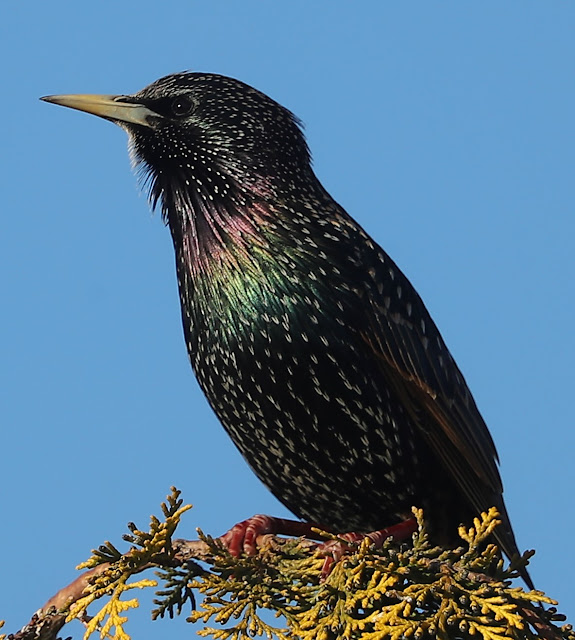 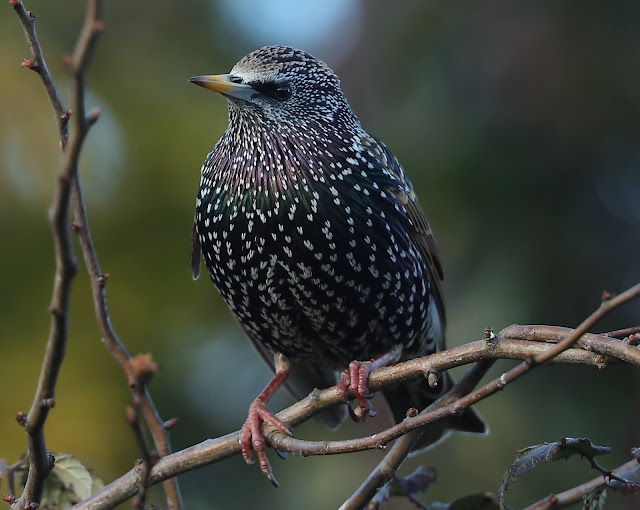 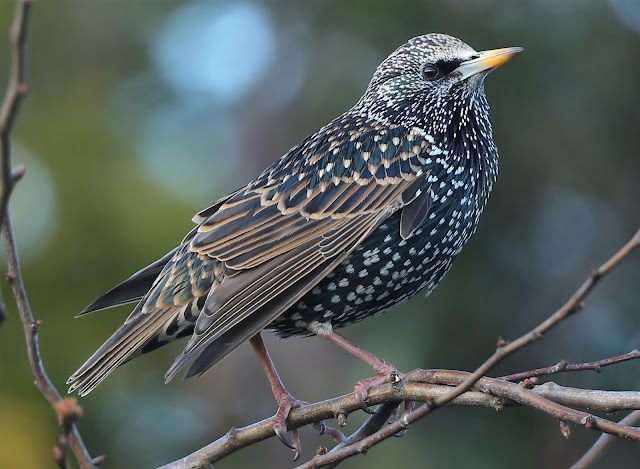 Posted by The Breckland Birder at 16:38 No comments:

Once again, we see that twitchers have given real birders a bad name by driving distances to see the Northern Mockingbird in Devon, whilst we still are under the restrictions of Covid, including travelling for essential journeys only.

I am disgusted at the behaviour by these wholly selfish idiots who are putting others lives at risk in their self-centred obsession to see a rare bird.  If, for example, one of these idiots had an accident, the services and resources used to attend to them should be used for some poor person who really needs attention.

I notice from news reports that some of these idiots were issued a measly £200 fine, a fine they were undoubtedly prepared to risk to see this bird.  Firstly, the fine was too small, and secondly, these irresponsible people should have had their driving licences withdrawn for a period of 6 months.

Once again, I wish to reiterate I am not, never have been, and will never be a twitcher-type.  Too many examples in recent times have shown how twitchers have offended real birders by their breaking of current Covid restrictions, and at times, actions which have resulted in criminal activity.

I must add that some well-known bird guide sites should take some responsibility, along with those who release information on rare birds, for poor behaviour by selfish twitcher-types.

I am pleased to say that those who resort to rule breaking and criminal activity to see a rare bird, are in the minority, real birders look upon these idiots as disgusting, shameful people who are not welcome members of the birding community.  I also find it rather strange when I invite twitchers to give their side of the story as to why they should break current restrictions and laws to see a rare bird that they fail to respond, come on, don't be shy, let's hear your side of the story.

Posted by The Breckland Birder at 23:25 No comments:

A local walk in the woods

Another day of icy conditions, however, the last day of this for now with much milder weather with wind, rain, and temperatures into double figures.

This morning I walked through local woods where a lot of standing flood water/ice remains with snow remaining, it was within the woods I found a lovely spot by a frozen pond in Carr woodland.  The woodland initially looked lifeless, but after waiting a while at least 4 Blue Tits, Marsh Tits, and Goldcrest passed through, keeping low where little wind bothers them, whereas high in the canopy the wind caused a good deal of noise amongst the upper reaches of the trees. 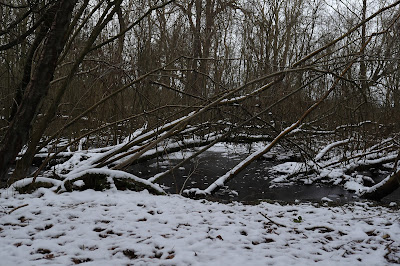 Whilst watching this beautiful habitat I was hoping for a Woodcock to appear, but it was not to be.
It was in this snowy woodland where I fund several patches of fresh earth where probably Deer had hoofed the ground for nuts, acorns etc.
Probably the most notable species seen this morning was Redwing where many birds were seen flying between trees, not only here, but in other woodlands also.  I managed to see a few Redwings on woodland floor where they were tossing aside leaf litter in their search for invertebrate food.
A Great Spotted Woodpecker was 'drumming', but no sign of Lesser Spotted, a species I have recorded here in previous years. 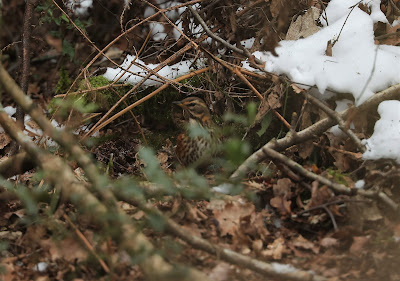 Redwings are easily spooked Thrushes, however, with patience, these beautiful Thrushes will be encountered, as with this one, along with others, on the woodland floor searching amongst leaves for food.

Redwings, along with Fieldfares, are now beginning to show locally, these will be passage birds returning north to breed.

Posted by The Breckland Birder at 09:52 No comments:

Recent records from the garden

With birding confined to the garden, and the occasional local walk for 'exercise' birding has been for the most part confined to the garden.  Concerningly, however, it is evident from reading various journals, social media etc. that some selfish people continue to go birdwatching clearly away from their local area.  When will these numbskulls comply with the current law and rulings regarding Covid.

Birding in, and from the garden in recent days has been productive, and indeed, if we were Covid-free, some species would have been missed.

The first day of February provided me with a male Blackcap feeding upon apples I had halved and hung on a tree, in fact, I provided fruit specifically for Blackcap in winter. 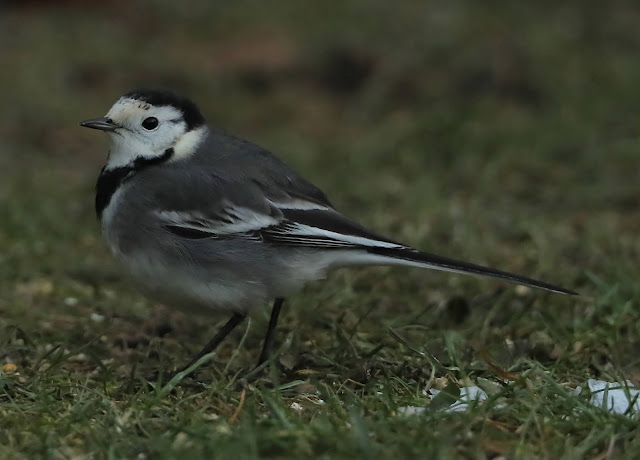 A pair of Red Kites appear daily over the garden, as do Buzzards, but on the 10th February, a juvenile Peregrine passed NE and low overhead.  Sparrowhawks are regular.

On the 12th February a small flock of Lapwings were seen flying WNW, given the bitterness of the wind and recent snowfalls, I wonder if this was a hard-weather movement.

House Sparrows are well represented in the garden with around 30 or so birds daily attending feeders, also Starlings are daily in good numbers.  I have noticed that the bill if the male House Sparrow are now black, a feature of the birds appearance which happens with the breeding season approaching.   A pair of Dunnocks are present daily, either with the male singing high in the hedge, or birds typically shuffling on the ground close to cover.  Single Pied Wagtails visit, they have a penchant for meal worms. 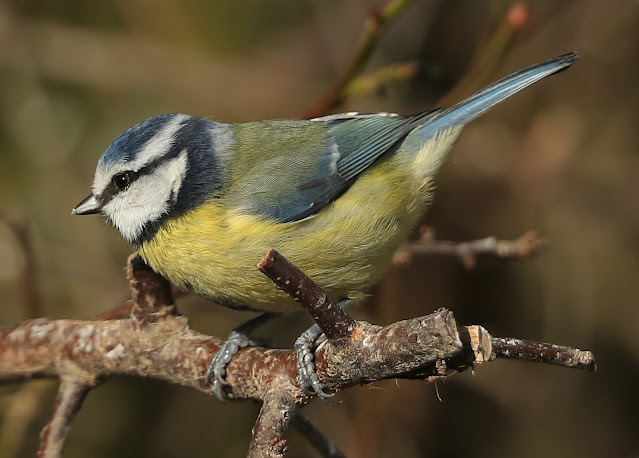 Blue Tits are common, I wonder how many individuals actually visit throughout the day as they move round various feeding sites.  Great Tits also appear, often at dusk.  I love to watch Blackbirds gathering at dusk in the garden, and close by, as they silently sit until it is time to fly to their roost sites.

I noticed today that Fieldfares are now putting in an appearance, these are likely to be migrants moving north for Scandinavia to breed.

Posted by The Breckland Birder at 14:04 No comments:

1st February (A good start to record collecting for the month)

Some excellent records collected locally today began with a two hour walk through my local Breckland habitat. I decided to walk my chosen route following Dawn Balmer’s record of Hen Harrier there yesterday.  Despite not seeing the ring-tail, species I did record Crane (3) Marsh Harrier (3), Goshawk (1♂), Cetti’s Warbler, and Brambling.

Later in the morning once home, good record collecting continued when a fine ♂ Blackcap was seen feeding upon halved apples I hung on a tree.  A local Sparrowhawk also passed through causing panic amongst the Doves and Starlings.

I arrived home at about 100hrs to find this lovely male Blackcap in one of trees feeding upon halved apples I hung out.  By providing this fruit like this, Blackcap was a species in the forefront of mind to attract into the garden.
Posted by The Breckland Birder at 21:56 No comments: