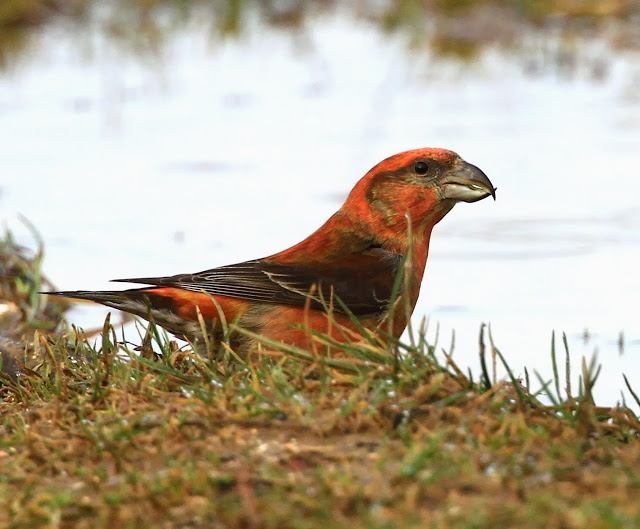 Today I found my first Woodlark of the year displaying song-flight at Bodney, Norfolk.  I occasionally feel down, but this beautiful bird always lifts ones spirit.
Posted by The Breckland Birder at 07:29 No comments:

Bird populations have seen significant changes in my lifetime, most birders will know that most changes are for the negative, however, we have seen some successes.  Common birds have suffered the most with huge declines in numbers, declines which have been significant.  David Attenborough recently announced that since 1970, we have lost 60% of all life on earth, these losses are directly attributed to the actions of us, the Human race, I personally feel ashamed that we could let this happen.
This leads me onto writing about BTO's Birdtrack survey, an extremely important survey which monitors bird populations, movements, breeding successes, and habitat needs etc., these scientific surveys, which are open to anyone with good Bird identification skills, are used by researchers, policy makers, and Conservationists.  I would urge all birders to use Birdtrack because in these days of Urbanisation, Industrialisation, Intensive farming practices, and environmental vandalism, maintaining and monitoring birds is more vital now than ever before.

January
Winter is an exciting time of year for wildfowl in Norfolk, therefore, on the 5th I paid my first visit of the year to Lynford Water where 3 Goosander (2 males) were present along with good counts of wildfowl including 80+ Tufted Duck and a few Gadwall.  A single Little Egret was present, also a couple of Crossbills were seen, a reliable site for this beautiful Finch.

On the 6th at Hockham 200+ Siskins were seen in an Alder belt, typical habitat for this species to be found in.  Crossbills passed over and 3 Marsh Tits were seen together.
I visited the Watton Brook Valley at Great Cressingham on the 11th where 9+ Snipe were seen in flood plain whilst on close by farmland 300+ Lapwings.  100 Siskins were seen in Alders and 3 Mistle Thrushes were singing in the valley.

A very early start at Hockham on the 18th produced 4 Tawny Owls calling in the forest around me.  10 Crossbills gathered in traditionally used trees where they preened before setting off for the day to feed.  A single female Stonechat was seen on prominent posts and weeds.

My second visit of the month to Lynford Water was again productive with 41 species recorded on an early morning walk. Wildfowl of course featured with 60+ Tufted Duck being the most numerous Duck species, also present was 2 male Goosander.  At least 3 calling Water Rails heard and 4 Little Egrets were roosting together in lake-sides trees.  Probably the highlight species today was the presence of a Green Sandpiper.


The morning of the 20th started very cold with a temperature at sunrise of (minus) -7 degrees Celsius. At Hollow Heath near Bodney a pair of Stonechat were seen on the roadside verge using posts and tall weeds to watch the ground below for food.  Nearby on open farmland a single Woodlark was both seen and heard.
The morning of the 21st once again saw the pair of Stonechat on heathland/roadside verge near Bodney.


During a morning work break on 22nd I visited Hingham and found a Great White Egret perched high in trees, later, this elegant, stately looking bird flew to the ground and stealthily began to search a ditch for food.  This elegant bird was as large as a nearby Grey Heron.  The Egret was clearly a very conspicuous bird on the ground in its all-white plumage, long and slender neck, long dagger, orange-yellow bill and all dark legs.
Also seen was a hunting Barn Owl which attracted a number of Reed Buntings, also when hunting the Owl 'put up' a Snipe.

A mid-afternoon visit to a large maize strip at Little Cressingham was particularly notable for its Finches.  A minimum of 100 Greenfinches was present around and in the maize, their numbers being seen when disturbed and flying into trees.  This was a pleasing count of Greenfinches, especially given their recent difficult times.
Also seen was 30+ Bramblings which readily mixed in with the Greenfinches.

On the 26th I returned to Hingham and readily located the Great White Egret, on this occasion a single Little Egret was present for comparison.  £ Grey Herons and a hunting Barn Owl seen.

At Hockham on the 28th, a pair of Stonechats were found along with at least 5 Crossbills.

My last visit to Hingham in January (29th), was particularly productive.  A count of 30 species was my highest species count for the month at this site and included within this count was once again, a Great White Egret, a hunting Barn Owl, and also a hunting Sparrowhawk, which as it shot passed me revealed its slate grey upperparts, and reddish facial and upper breast area.
The 29th however will be noted for its high number of Bunting and Finch species present.  A small field containing tall weeds and unharvested crop attracted Yellowhammer, Linnets, Reed Buntings, and Goldfinch, their numbers were revealed when 'put up' by the hunting Sparrowhawk.  Moments later, I saw a 'different' looking bird sitting on a hedge at about 100 feet from me, a prolonged view of this bird revealed a Corn Bunting, a very scarce bird in Norfolk now.  What a great bird to round January off with, I was very pleased.
Posted by The Breckland Birder at 12:00 No comments: